The experience of endometriosis

How to explain the experience of endometriosis?  It is not a "bad period" or "monthly pain."  It is an all-consuming, life-altering pain that has real impacts on quality of life. It is not simple fatigue, but rather, all-out exhaustion that prevents you from functioning.  It is not simply irregular bleeding, but instead bleeding on more days of the month than not.

Endometriosis intensifies with age. This has certainly been true for me.  Twenty years ago I used to be able to manage my pain with a normal dose of ibuprofen. When that no longer worked, birth control pills worked for a time. When those stopped worked, depo provera was tried. That never worked. In recent years, I have tried Toradol, a prescription NSAID, which also did not work, as well as narcotic pain relievers.  I am very cautious about my use of these because I know that if misused, they can have disastrous consequences.  Also, I find them to cause intense constipation which only exacerbates the pain of endometriosis.

After my laporoscopic surgery last year, my doctor put me onto Lupron.  I suffered through six months of this drug, a nasty injection that causes immediate chemical menopause. In my case, it also caused suicidal ideation, mood disturbances, and nearly continuous hot flashes. You are limited to six months of Lupron every few years because it depletes calcium stores and decreases bone density. It is a nasty, nasty, drug.

I have been taking continuous birth control pills since last April.  These have exacerbated my hot flashes and mood swings.  They also cause a more or less continuous menstrual period.  I pass large pieces of uterine tissue and blood clots.

I have passed out from pain. I have thrown up from pain.  I regularly experience fevers during ovulation and menstruation.  I alternate shaking with chills and sweating uncontrollably. The only thing that can somewhat soothe my pain is sleeping in a dark, quiet room with a heating pad. This is not all that compatible with being a functioning human being.

On Saturday I was woken up out of a sound sleep with a stabbing pain in my abdomen that continued for hours. It was accompanied by a fever. The pain decreased when my period started for the third time in two weeks.

When I am in pain, I can easily sleep 14-16 hours a day.  This impacts my ability to work and be social.

I know that endometriosis is a progressive disease without a cure. I know that more surgery is likely ahead of me.  I know that even when excised, endometriosis lesions can recur. But I also know that I am putting a lot of hope on my surgery next week.  I will undergo another laporoscopic abdominal surgery where my surgeon will attempt to excise the endometriosis lesions that I have.  I will also undergo a uterine ablation, where the lining of my uterus will be cauterized. Finally, I will have a Mirena IUD placed.  The IUD delivers progesterone locally, which will hopefully decrease the side effects I experience from taking hormones systemically.
Posted by Unknown at 8:43 PM No comments: 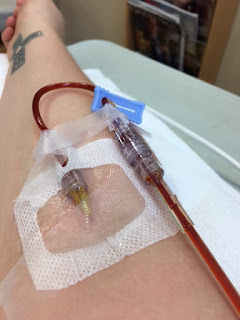 I've been tired this year.  I have emotionally been through a lot, so I attributed my unrelenting fatigue to a year that included a lot of stressors. Back at the beginning of August I went to my physician for a check up.  I was expecting them to tell me that I was likely just worn out and needed to rest.  I wasn't sure how this would work, since I was already sleeping about 14 hours a day, but I figured it was probably nothing.  Instead it turned out to be something.

My labs were off, indicating that my kidneys weren't doing their job. My labs have been mildly abnormal for about a year, so my doctor sent me off to a nephrologist, a kidney specialist.  I was diagnosed with Chronic Kidney Disease, stage 3, based on my labwork.  The other interesting finding is that my body had extremely low stores of iron and downtrending hemoglobin.  This anemia was the cause of my extreme fatigue.  The kidneys produce a hormone, erythopoeitin, which stimulates red blood cell production, which carry oxygen. My kidneys weren't telling my body to produce enough red blood cells. I was prescribed oral iron supplements.  After about six weeks of oral intake of iron, I still wasn't feeling better, so I began a series of iron infusions. Finally I am feeling better. The picture you see with this post is one of my infusions of iron.

The biggest question is, how did I end up with kidney disease?

Well, based on my medical history, the nephrologist had an answer for that too.

I have had endometriosis (a disorder of the reproductive system where painful lesions of endometrial tissue grow outside the uterus and adhere to other organs, tissues, and vital structures) likely since I was 13. This disorder is characterized by excruciating pain, and a whole host of other unpleasant symptoms.  This disease is only diagnosed by surgery, which I had in September of 2016.  To combat the pain, I took exorbitant amounts of ibuprofen.  Sometimes up to 24 pills a day, that is 4800 mg, or about 1200 mg more per day than the recommended Rx dose.  The kidneys filter drugs from the blood, and my kidneys have taken over twenty years of abuse from ibuprofen.

I have been very quiet about my endometriosis because there is such a stigma involved with menstruation and the female reproductive system.  But I am tired of being quiet about it.  Endometriosis has had very significant consequences in my life.  I have extensive scarring.  I am having a second surgery on October 3.  Endometriosis is one of the most common contributors to infertility, and I have been diagnosed with this also. Endometriosis causes intense pain, which I average feeling about 2-3 weeks per month. Endometriosis has irreversibly damaged my kidneys.  Kidney Disease has a very slow progression, and because I have eliminated all NSAIDS from my life, my trigger for kidney damage, my disease will likely stay exactly where it is and I will not ever need dialysis or transplant. Since I do not have diabetes or high blood pressure, my kidneys are not under stress  any longer.

This post, my coming out about endometriosis and its consequences in my life, is my attempt to destigmatize and demystify the disease.  Watch for more posts to come.
Posted by Unknown at 8:57 PM No comments: