Oh, and this is in the lobby of my hospital 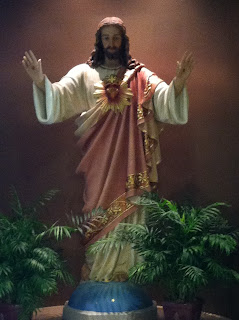 It's the seven-foot Sacred Heart of Jesus in the lobby by my office.  Yes.  Lobby Jesus is watching you...
Posted by Unknown at 10:05 PM No comments:

Tools of the trade 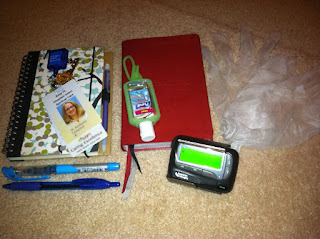 This is what I carry on my person at any given point in time in CPE.  Plus my phone.  Depending on where I am on-call, I could have two pagers and two phones as well.  The chaplains were joking around that a fanny pack is a great practical choice, even if it's a terrible fashion sin.
Posted by Unknown at 9:01 PM No comments:

I stumbled across this blog, Texts from Dog, on twitter a few weeks ago.  It's pretty fantastic.  Not appropriate all the time (sorry, Mom).  Adding another thing to my list of procrastination tactics.  Enjoy!
Posted by Unknown at 9:26 PM No comments:

Today I am embarking on a two-day, self-led silent retreat.  It will be at the Loretto Spirituality Center in Littleton.  This is my fourth silent retreat, although it will be the first one that has not been directed by someone else.  I have a massage scheduled for tomorrow morning and spiritual direction scheduled for the afternoon, otherwise, I just plan on attempting to empty my brain, relax, and make space for God.

This has been a really long and really tough year, especially since January.  Seminary is all about deconstructing and re-examining and looking at long-held beliefs and assumptions.  Next week I begin my chaplaincy internship, and I knew that I needed to take some time to take care of myself before I can even attempt to take care of other people and be fully present with them.  I have learned with my previous silent retreats that it is best to not come with any expectations or goals.  I am just going to show up and experience all that I can and relax.

I pray that for everyone. That you might find space for personal reflection, the grace and love of God, and a little bit of relaxation.
Posted by Unknown at 10:33 AM No comments:

In one week I start Clinical Pastoral Education at a level I trauma center here in the Denver metro area.  There are only three level I trauma centers in Colorado, and the most seriously ill and injured patients come to these hospitals.  In other words, there is going to be quite a lot of need for chaplains there.  CPE is probably the most grueling requirement of the candidate for rostered ministry.  But probably also the most important.  CPE is a chaplain internship, but it also provides a catalyst for doing the deep internal emotional work that is necessary to be a pastor.  You spend time with patients every day, but also spend a substantial amount of time processing the experience with your peers and supervisor.  There is also writing and reading among other things.  So in other words, it is a lot like school, just more intense.

I stumbled onto the blog linked below on Twitter today.  I think it is pretty useful.

I will post about my CPE experiences this summer and how that figures into my formation for ministry.  In the meantime, prayers for me, my CPE cohort, and the hospital would be much appreciated.

My heart is very sad today.  Last night the Denver City Council voted to criminalize "urban camping."  This is a euphemism which makes it sound way more fun that it actually is.  Rather, "urban camping" means criminalizing homelessness.  There are not enough shelter beds in the city of Denver for the people who are homeless on any given night, so this new ordinance makes it possible for police to ticket homeless people for merely being without a place to stay and sleeping on the streets.  This was put forth by the powerful business lobby in downtown Denver.  Even the police say they do not want to enforce this law because it is not a solution.  As someone who works at a homeless shelter, this impacts us and our services.  There are so many root systemic causes for homelessness, that merely making it illegal to sleep outside is not going to solve anything.  Until we address a lack of health care services, mental health services, substance abuse, domestic violence, generational poverty, and the stigma of being poor, this cycle is condemned to repeat itself over and over again.

Also last night the Republican-run house killed the Colorado Civil Unions bill in committee.  Shameful. It is a really tough day to be a Coloradan.  I am really ashamed of my city and state.  There is a lot of grieving today.

Last thursday, I posted about my sadness with regards to how the United Methodist Church decided to legislate that homosexuality was not compatible with Christian teachings.  Yesterday the state of North Carolina passed an amendment to their constitution that defined marriage as only between one man and one woman.  What strikes me as ironic is that the same people who are demanding a "smaller" government with regards to fiscal and social policy, are demanding that the government legislate love and marriage and commitment.

Also last thursday evening I learned that a civil unions bill made it out of a Colorado House of Representatives committee, and that it would go before Appropriations, and potentially be taken before the entire House.  Yesterday was that day.  By 4pm the bill had made it out of Appropriations and was to be debated by the House.  Yesterday was the last day of the legislative session in which bills could be debated.  In a moment of juvenile partisan politicking, the House Majority leader, Frank McNulty, decided to lead a filibuster for several hours which prevented the bill from even making it onto the floor.  The session closed amid insults and mudslinging from both sides.  Not only did this bill not make it through debate, but the filibuster took down 37 other bills too.  Many of my friends this morning were sad and my heart breaks for them.  The government attempts to tell them that their love is invalid.  Inferior.   At a morning coffee break with a group of friends from church, we were discussing this and how angry it makes us.  There are no words to take away how much this hurts people that we care about.  We could not comfort our friend in such pain this morning.

But this afternoon Obama came out in support of gay marriage.  He is the first sitting President to do so.  And all I have to say is that it is about time.  Vice President Biden came out a few days ago in support of gay marriage.  This is really important.  I believe that the tides have changed, and while painfully slow, progress is being made.  The hateful vitriolic criticism is the dying gasp of the social conservatives.  Change is coming far too slowly, but it is coming. There is hope.  A tiny flickering little bit of hope.  And later on today, our governor called for a special session to debate the civil unions bill.  Light flickers in the darkness.

The problem is not about who loves whom.  It is about hate.   And there is so far to go.  As for me, I just keep praying that God will help me love the people with whom I disagree so deeply and that in turn, those who direct such hate towards my GLBTQ friends might soften their hearts a little too.  Then maybe we can meet in the middle and have a conversation.

"Outside ideas of right and wrong there is a field.  I will meet you there." -Rumi-
Posted by Unknown at 9:54 PM No comments:


So, I stumbled across a link the other day that I think I am going to try.  Anybody else in with me?

Two-Week Stress-Less Plan by Real Simple
Posted by Unknown at 8:36 AM No comments:

Almost three years ago, in August 2009, I was glued to a live stream of the ELCA Churchwide Assembly for the better part of a week.  The church was voting on whether or not to accept the Human Sexuality study, which, among other things, would provide the opportunity for GLBTQ persons to be ordained and be in same gender relationships.  This is something that I feel very strongly about, as an issue of justice, of the Gospel, of being a part of the Body of Christ.  I watched and prayed and waited for Love to prevail.  After extended prayer and discussion, the ELCA agreed to acknowledge the full expression of human sexuality with adopting the Human Sexuality statement.

Today, my Methodist brothers and sisters approached the same topic.  However, the debate did not go the same way.  The assembly voted down a proposal that would have changed official language in the UMC Book of Discipline that states, "Homosexuality is incompatible with Christian teaching."  The proposed change was language that would agree that Christians can hold different views on this subject and still be faithful.

We can only pray.
Posted by Unknown at 8:52 PM No comments: