It's not really springtime after all.  It is about 25 degrees with blowing snow.  What a change from yesterday! 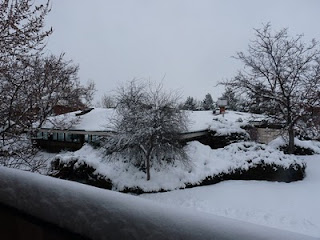 Yesterday marked the first sandal day of 2010.  It has been wonderfully warm this week, with temperatures in the 60s.  Probably as a function of living in cold climates my entire life (Montana and South Dakota), I have a tendency to push the envelope on the seasons.  I decided that it was time to pull out the sandals in Colorado, because my Montana friends have been wearing theirs for a week now.

Growing up in Montana, my sister Katie and I loved to pass the days of summer while playing in the sprinkler or pool in the yard.  It didn't matter if it was scarcely above freezing, as soon as school ended at the beginning of June, we were begging Mom to let us play with water in the yard.  The rule was we could not play in the sprinkler until all the snow was melted from the Bridger mountains.  Which is somewhat misleading, because the snow never completely melts from the Bridgers.  But I guess it worked to distract us for a couple weeks, until it got marginally warmer.  As we got older, it was less about playing in the yard, but instead about wearing sandals and not wearing coats, hats and gloves.  Really, anytime it was above 45 degrees, me and most of my friends could be found wearing sandals. Even if there was snow on the ground.

In College, after a miserable and gray winter, the first breeze of spring found me and friends outside studying on the green.  Even if it was slightly too cold to be laying in the sun with our schoolbooks, after months of clouds, ice and snow, we were ready.

Compared to Montana and South Dakota, Colorado weather is downright balmy.  It has been over 60 degrees every day this week.  However, for downright strangeness, Colorado beats Montana any day.  Tonight there is a winter storm warning, with a 90% chance of a blizzard with the potential of multiple feet of snow.  But right now, as I sit on my patio, the sun is out, the sky is blue and I cannot imagine a blizzard.  We will see what happens....
Posted by Unknown at 6:09 PM No comments:

Living on the Edge...

of pure chaos!  Recently someone asked me what song would be the soundtrack of my life.  It would be hard to pick just one, although Storyhill accompanied me through most of College and in the last five years.  But that is another post.  Lately, the song that gets stuck in my head is "Livin' On the Edge" by Aerosmith.

While the lyrics convey that living on the edge is something bad and out of control:

I beg to differ, although I could see how this would be a response to chaos and uncertainty.  I prefer to think of living on the edge as an adventure.  But not just any old adventure, this adventure of mine is hilarious.

I know I have written plenty about my job, but since it is what I spend most of my waking hours doing, I will write more.  I really enjoy my job for many reasons, but primarily the fact that NO day is ever the same as well as the general attitude of positivity that is shared.  Someone who likes structure, predictability and peace and quiet would lose their minds here.  Someone who views challenges and frustration with anger or impatience would go crazy too.  My time here has taught me a lot about the most constructive way to solve problems and the best way to approach utter chaos.  Which at least for right now is patience combined with a heavy dose of humor.  Sometimes all you can do is laugh.  It sure beats being angry.

The misadventures of my workplace have become so crazy lately that I feel like we are operating on the edge of complete chaos most of the time.  But it will serve no one to get frustrated, so seeing the humor and moving forward in problem solving is essential.

Last week I arrived on campus at 7:00 am to bear witness to a flood in one of the buildings.  Now, a "flood" might be a toilet that overflowed, a sink that was backed up or a leaking water heater.  No, this was a lake.  Visualize three inches of water covering the floors of two classrooms, two bathrooms and a hallway.  Floating trash cans, books and recycling bins.  This was not caused by a simple leak or clog, it was a catastrophic malfunction of the water heater.  I suppose you could get mad or sit down and cry.  Or you could stand in the middle of the lake, water sloshing over the top of your shoes, and laugh.  You could find someone to blame, or you could get started with fixing the problem.

My colleagues are nothing if not resourceful.  Throughout the morning, the standing water was pushed out the doors with brooms and snow shovels.  When the water mitigation company arrived later that day, they still removed over 50 gallons of water from the carpet.  I spent two quality hours outside on the playground supervising some highly distracted 3rd and 4th graders as an army of parents moved the entire contents of both classrooms to our only remaining open spaces on campus.  Which means, I kid you not, if you want a quiet place to meet or make a phone call, you go outside or into the bathroom.

It was an exhausting but funny day.

Pushing tidal waves of water out the door with snow shovels.  Priceless.  We have pictures.
Oh, we have to replace the sub floor because it is waterlogged.  Expensive and complicated, but so ridiculous it is worth a laugh.
The drywall needs to be replaced too?  Haha.  You don't do that everyday!

And to take the cake, watching semi trucks drop two halves of a modular classroom into our parking lot this afternoon.  It won't have plumbing and I have no idea where the electricity is coming from, but if one building is trashed, just order a new one!  I know the financial realities of our non-profit, so I am not trivializing the expense of fixing this major issue.  Merely a way of coping with a terrible situation.

I could go on and on, but that is for another time.  I guess word to the wise, you'll sleep better and stress less if you can laugh at the absurdities and chaos around you.
Posted by Unknown at 5:58 PM No comments: