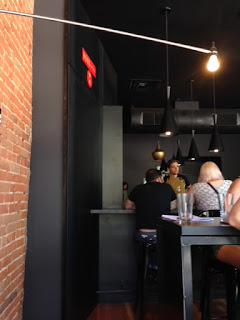 I drive by this coffee shop frequently and have never been in.  It is located on the corner of a residential area, in the same tiny strip mall as a local meat market. Novo has three coffeehouses in the Denver metro, as well as a roastery located at 3008 Larimer Street. 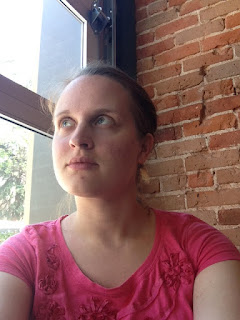 I order my standard drink, a medium dark roast with room.  I am informed that all Novo roasts are light roasts.  So I ask for the least acidic roast and am directed to the Shakisso (an Ethiopian roast).  I fix it up with two packets of Sugar in the Raw and some cream, enough to make it a beautiful "cafe au lait" color.

My first impression of the coffee is that it has quite a bite to it and I am not sure that I like it.  I decide to let it settle and sip more later. After it settles, the coffee is much smoother.  It goes down without much bite and it has a pleasing creamy aftertaste.

The environment of this coffee shop is simple, exposed brick and wood floors.  Minimal artwork on the walls.  Well-lit, courtesy of the wall of windows in the front.  There is music playing but it is neither too loud nor too distracting. There are plenty of tables and chairs, as well as stools at the bar.  Baristas are friendly and social. There seem to be an equal mix of patrons working and socializing. There do not seem to be many outlets available, I can only see one from my vantage point.

In terms of parking, I cannot comment as I walked to this coffee shop. It is located off a very busy street (6th ave) so parking could be a challenge at times.

Overall: this is a great neighborhood coffee shop that I will visit again!  The friendly and helpful attitude of baristas, the comfortable work space, and the delicious coffee.  Lots of patrons are drinking iced coffee, so perhaps that will be my next adventure.

Created in the image of God 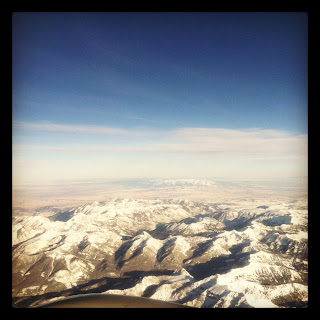 If I am totally honest, part of the reason that I went to seminary was to learn enough about the Bible so that I could feel like I could defend myself, my sexuality, to those people who were telling me that I was an abomination in the eyes of God. I spent most of my life feeling like there was the word of God, which I was told was extremely clear on issues of homosexuality, and then there was me.

I was a Christian, but I just did not feel like I belonged in the body of Christ.  I always felt like the promises of God’s grace and love were for other people.  Those people who were straight. As a teenager, and young adult, I had a ravenous appetite for devouring scripture. I read the Bible with desperation of someone starving for acceptance. When reading the Bible did not yield the answer that I so deeply wanted, that I was loved by God despite my sexuality, I pursued graduate theological studies.

I read every book that I could find that talked about sex and marriage and love in the Bible.  I learned Greek and Hebrew, so that I could read scripture in its original language, hoping against hope that I would find what I was looking for. I engaged professors and fellow students in energetic discussions, arguing with every person throughout my life who told me that I did not belong. I joined progressive Christian communities, and I even preached the radical love and acceptance of God, but I struggled to believe it could be true for me.

Around this same time, I met the love of my life, my partner Katrina. Our love is a glorious thing and it is through this beautiful relationship, that I have come to know God’s love for me as a queer woman. As I wept bitterly that I was graduating with my Master’s of Divinity degree and still did not have definitive proof that I was loved by God, she simply said, “God has created us and our love for one another, and it is good.  Because how can something so beautiful as our love be anything but from God?”

I am created in God’s image, including my orientation towards intimate partnership with another woman, and it is good. I have read the Bible cover to cover multiple times, I know the history of sexuality in the Bible and in the ancient near east and the Greco-Roman world, and yet, I never dared to believe I was loved by God until I dared to be loved by a woman.

I could argue all day about why homosexuality as we know it now, as a consensual, loving relationship between two adults simply did not exist in the past. I could argue that the Bible contradicts itself and that at the center is love and acceptance. But that will never be enough, because “knowledge puffs up, but love builds up.” (1 Corinthians 8:1) It is love that changes everything.

To those of you who are wondering if God loves you because you are gay or trans or genderqueer, the answer is yes!  To those of you who have never heard that you are loved by God’s people and that you belong in the body of Christ, you do! If you will let me, this queer Lutheran pastor will never stop telling you that you are made in God’s image and that you are loved by God and by me and by so many others who follow Jesus. Because how can anything so beautiful as you be anything but from God?
Posted by Unknown at 8:05 PM No comments: 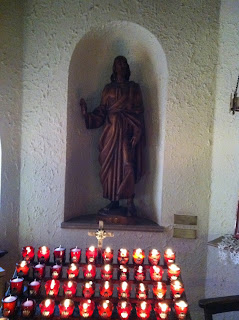 Grace, peace, and mercy are yours from the Triune God.  Amen.

Posted by Unknown at 9:29 PM No comments: